Music on the streets

Thais love to sing and they're encouraged to do so at an early age. They become very good at it very quickly and with the kitchy Thai songs, it's all so entertaining.
Blind musicians on the street. Every weekend there is the "walking street" where you can buy just about any nick-nack under the sun. Very popular with locals and tourists alike are the blind musicians with their mixture of Thai songs and all the Western favorites.
Posted by Herman Chin at 9:07 PM No comments: 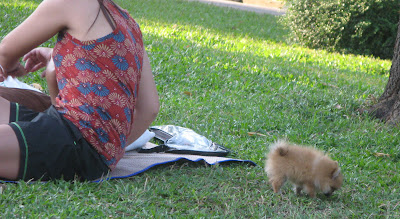 Wait a minute. Is that a dog?
Maybe it's me, or maybe I'm just not in with the pocket pup circles back home but I've been oblivious to miniature canines. 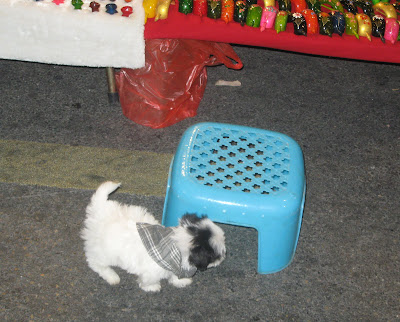 Thais love their dogs, and nowhere is it more evident than in Chiangmai.
Toy dogs are all the rage and you'll see them everywhere.
But when does a toy dog cease being a toy? You'll see people constantly playing with them; tossing them around, stuffing them in bags for transport, and of course dressing them up like a Barbie doll. But it's all part of owning a dog, isn't it? 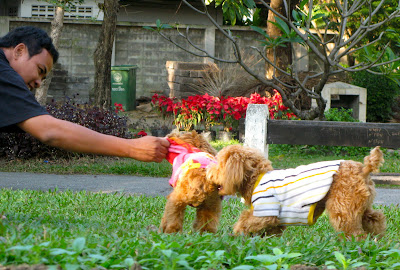 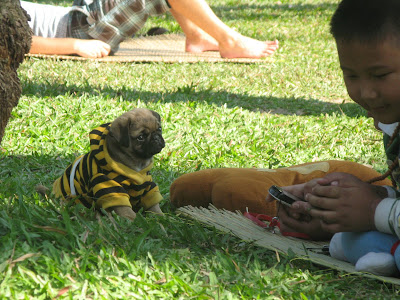 For the most part, toy dogs are very well behaved here, never straying far from the hand that feeds them. Leashes are a rarity and most of them are street smart. 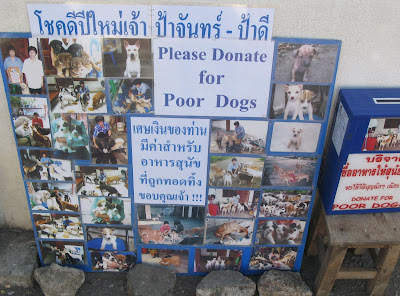 Unfortunately, there are a large number of street dogs in Chiangmai. They tend to be the "larger dogs", which we back home would consider a mid-sized dog. Many appear to be homeless although you do see people leaving food and water on the streets for them at night.
Many have battle wounds and some are in pretty bad shape but none are starving. 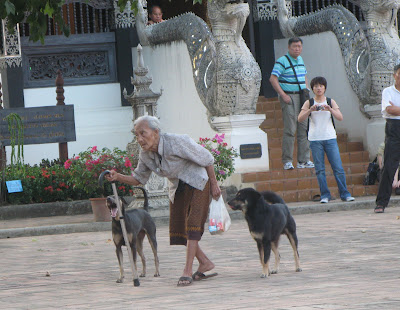 Temples are great refuges for stray dogs. Although they may not be considered stray. The monks do feed them and each temple has their usual assortment of dogs. They come and go as they please and nobody seems to care much if one goes missing. 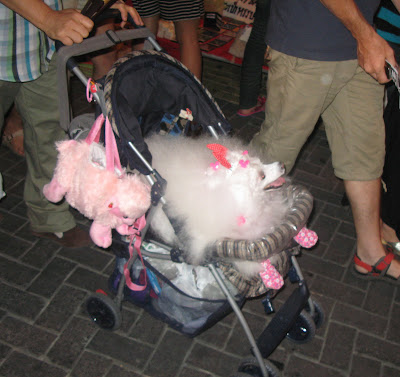 A well pampered poodle. Not a rare sight in Chiangmai. 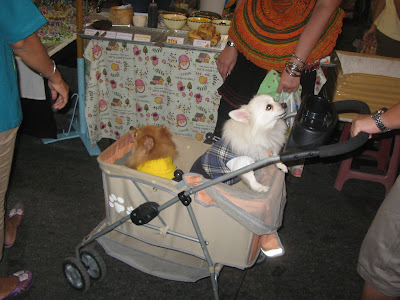 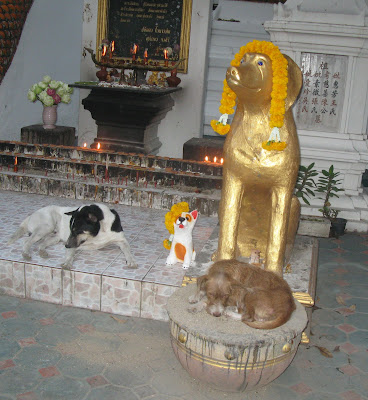 Dog shrine at a temple.
Posted by Herman Chin at 2:27 AM No comments: 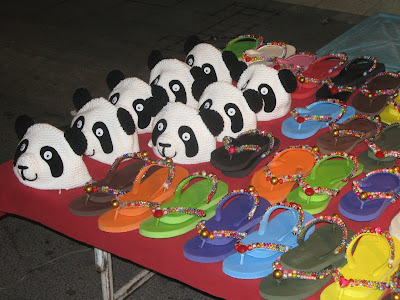 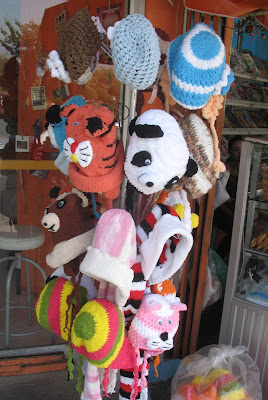 OK, this post is really for Alan's mom, who we're sure is crocheting up a storm back home, catching up with the holiday gifts.
The crochet or knit cap market has really taken off here in Chiangmai the last few years.
Seems some people are willing to put just about anything on their heads, and not just the tourists. 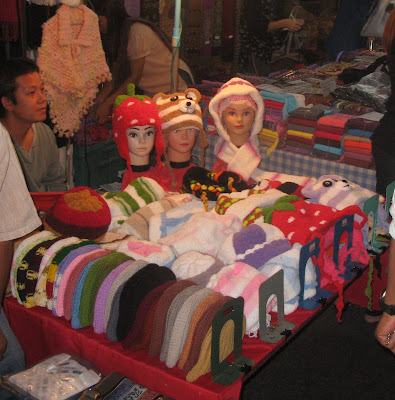 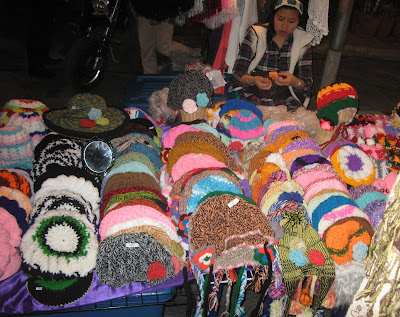 These go for about two to six dollars apiece, depending on your bargaining skills.
Mine aren't that good, plus I'm not willing to walk away over a mere twenty cents.
Always bargain in good faith (with a pretty good intention of making a purchase) but never argue with a seller. They generally have a pretty good idea what the lowest price is in any marketplace. 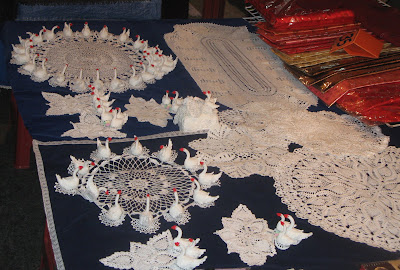 Then there are always swan doilies. You'll never know when you need them.
Posted by Herman Chin at 8:43 PM No comments: 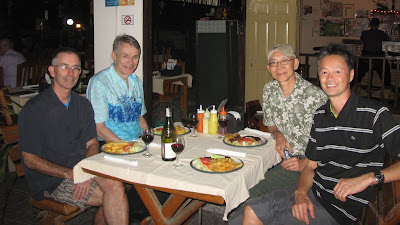 Merry Christmas from Chiangmai.
Holiday travelers are pouring into Chiangmai (well on the beaten track) and although Thais do not necessarily celebrate Christmas, there are decorations, Christmas trees, and Santa hats everywhere.
We spent Christmas dinner with some friends of ours from Sweden, who apparently travel to Chiangmai as frequently as we do. Yes, Steaks and French Fries, but not real "French Fries". 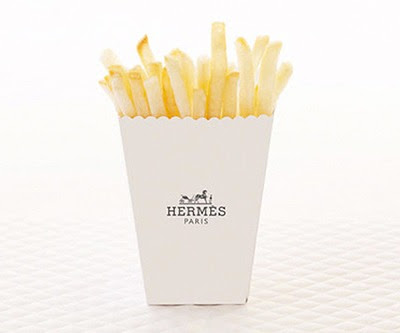 (photo courtesy of Bellagio, Las Vegas)
What's Christmas without carols.
Yes indeed. Although Thailand is predominately a Buddhist country, there are, especially here in Chiangmai, a number of private Christian schools.
Posted by Herman Chin at 8:03 PM No comments: 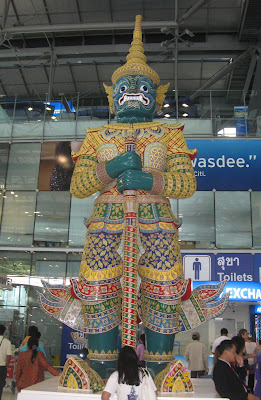 Escaping the beginnings of winter back home we arrived back in Bangkok.
For some reason, most of the flights from the California arrive close to midnight, after twenty or so hours of flight time and layovers.
We changed planes in Seoul, Korea on the flight over, where the plane was filled with predominately middle aged men on a golfing junket to Thailand. There must have been 100 golf bags at luggage collection in Bangkok. 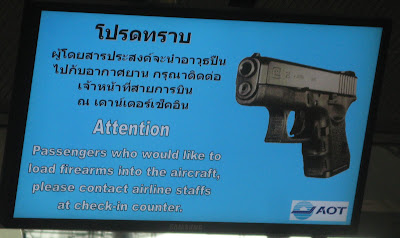 Apparently, if you would like to "load firearms" on board an aircraft, you have to contact airline staff at check-in. Not sure what would happen to you next. 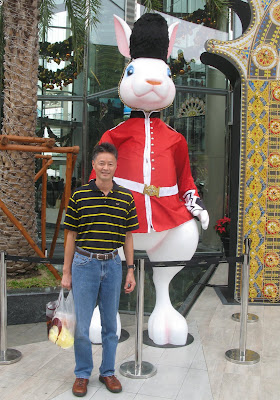 Is it Easter? Or is it Christmas?
Gone are any remnants of the violent protests earlier in the year. After years and years of almost daily protests, Bangkok seems pretty sedate. The shopping centers, even the trashed and burned Central World, were back to normal and buzzing with shoppers. 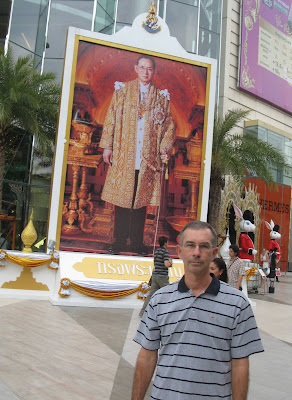 We celebrated the King's Birthday along with everyone else.
The King made a rare appearance on his 82nd birthday and everyone was pleased, not to mention glued to their televisions. Parades, marching, fireworks, there was plenty to be thankful for. 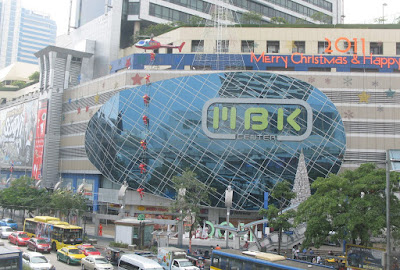 So when in Bangkok, I guess you go shopping.
We did along with everyone else.
We ended up at MBK shopping for a mobile phone. The Thais love their mobiles phones, I guess just like back home and you're nobody if you don't have one.
Luckily, they're quite inexpensive in Thailand. We paid around $25 for a nice basic phone and another couple of bucks for a Sim card. Then all you do is buy time. 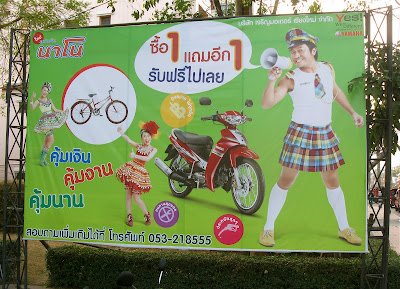 So this is Thailand, where this billboard is not actually "gay". It's just Thai. 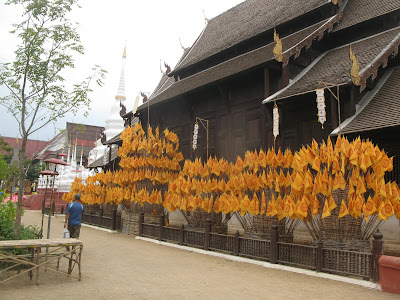 After a few days in Bangkok, we headed for the hills.
Chiang Mai is probably one of our favorite places to hang out in Thailand. The Thai and western culture are both very evident here and inseparable. Most of the city is accessible on foot or a simple songtew (taxi/truck). Yes there are tuk-tuks too. 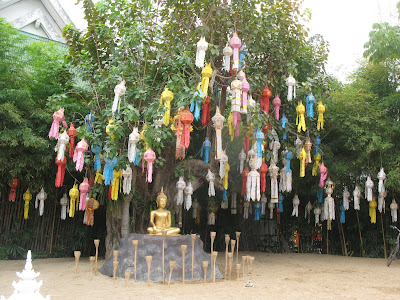 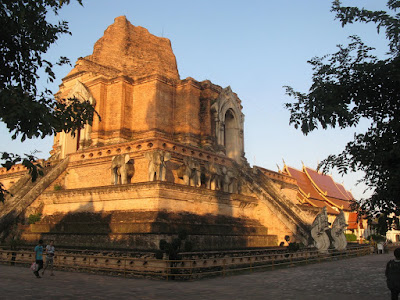 Posted by Herman Chin at 7:07 PM No comments: